Once upon a time there was a boy, and there was a girl….and they fell in love. But let’s go back to where it all started. This is our love story.

I (Shannon) was living in my hometown of Colorado Springs and had come to visit my good friend who was living in Collinsville and knew Joel from church.

When she walked into church, my (Joel’s) first thought was, “Wow…She’s hot!”

Although I didn’t have the same reaction to Joel when we first were introduced, I did think he was sweet. That was our first meeting. I went home; Joel went back to his life, and our paths didn’t cross again for a couple years. We were both working for our churches, and we happened to be working the same fundraising event in Seattle. Joel and Shannon  spotted each other on the last day and said, “I know you…aren’t you Brooke’s friend?”

I was playing it off all cool and nonchalant, but I totally knew who she was the moment I saw her.

We got to spend some time together at a few more events, and after spending the day together in Orlando with my friend Bri, she says to me, “I think Joel likes you.” My response was, “Maybe…but he’s too short.” 😉 Yeah, I always thought I would end up with someone tall.

Although I was totally attracted to her, I knew the timing just wasn’t right to try to pursue her. She was moving to California to go to school for fashion design; I was starting my business. I just knew I shouldn’t go for it…yet. At this point we kept up with each other on MySpace (remember that?) but still didn’t converse much. So it was a few years later that we really began to converse more. I happened to see that it was her birthday and thought, I’ll give her a call. Having diligently updated her number through the years every time she changed it or I changed phones, I was ready to test the waters.

The birthday call was what really started it for me. Although he didn’t actually reach me and left a voicemail, I was so excited when I got his message. Over the summer we started texting more and jokingly talking on Facebook about him hiring me as his assistant and me moving out here. I wasn’t happy with my job, or my expensive apartment – he was in desperate need of some administrative help. So that was our ongoing joke.

I was shopping in Pier One (yes, I can totally remember it) when I got a text from Joel. He was shooting a wedding in Boston and one of the girls at the wedding reminded him of me, so he was just texting to say hello. I got all giddy inside. And then I realized it…I get all excited whenever I hear from Joel. Could it be…? I immediately called my friend Brooke and asked her what she thought of the idea of me and Joel.

“Oh, I’ve always thought you’d be great together, but I never said anything because he’s short.” Exact words. Yes, my friends know me well. We discussed it more, and over the next few days I concluded that maybe I’d be ok with Joel not being 5’10” and I’d like to see if this could go anywhere. So I sent him what I call an open door text. I said something like, “It always blesses me when I hear from you. You’re such a sweet friend. Thanks for thinking of me.”

That was it. It was go time. It was the green light I’d been waiting for. We both said that we’d always wondered if there could be something between us, and, well, let’s give it a try. From then on we started talking every night. We planned a trip for Shannon to come see me at the end of September, and by the time for her visit I knew.

When I arrived at the airport Joel was waiting for me with a dozen lavender roses (my favorite). We had our first date at a Sufjan Stevens concert in Champaign, IL that evening. We had our first kiss (my first kiss ever!) that night. It was a magical trip, and I loved every minute of it! From there things moved at lightning speed. They say when you know, you know. And it’s true. I moved out here within a month, and we were engaged 2 1/2 months later!

It was Joel’s 30th birthday, and I had taken him out to one of his favorite restaurants (McGurk’s). Then we went back to his house and were just sitting on the couch when he said he had something he’d been meaning to read to me. So he runs upstairs and comes back down and reads me the most beautiful, romantic letter that he actually wrote the night before I first came to visit. At the end of it he pulled out a ring and asked me to marry him.  I was so excited that I started crying, took the ring and put it on myself!

I started laughing and was just like, “I think I’m supposed to do that.”

We were married just over 3 months later, on April 24, 2010.  It was a whirlwind engagement. We had limited dates open to us, what with the weddings we were shooting that year and his sister’s touring schedule. (She’s with a the Nature Theater of Oklahoma in NYC and travels a lot). But once the day arrived it was worth it. The ceremony was perfect – just how I’d always envisioned it. Then there was a tornado. Yes, my friends, about 15 min. into our photos the skies went green, the wind picked up, the sirens went off, and sheets of rain began to fall. I had a melt down. It happens. You never know what all your day is going to contain, but we sure do have a  good story to go with it

And that’s our story in a nutshell. We love being married! We’re still figuring things out, but it’s the greatest adventure you’ll ever take! Promise. 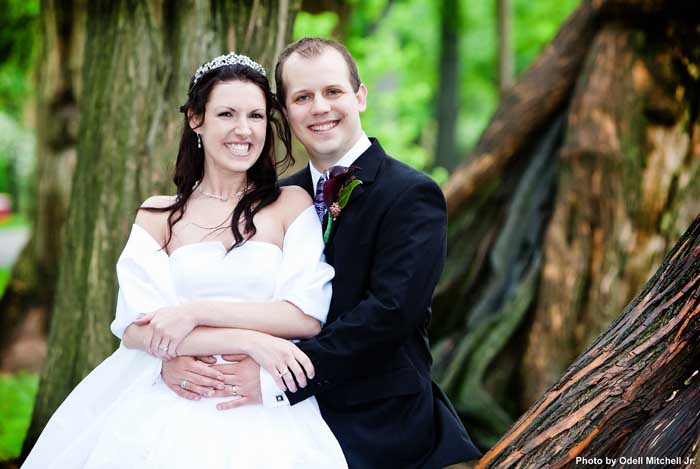